As times change and new styles and techniques enter the game, Kaput has remained true to his bold semi-traditional style tinged with New York graffiti influences. Co-founder of Vandal Team Supreme (VTS), Kaput and his crew have continued to spread their presence across the globe with their tags. Check out the interview below where he shares his life of writing and his thoughts on the road ahead.

When did you start writing? I started with spray paint, markers and stickers around 1996.
When you first started did you feel like you had to work hard at it or did it come naturally? I was already artistic which helped the creative side. It took time getting control of the can,which is something every new writer experiences.
Did being in Canada play a part in that? Canada does have a relaxed view towards writing but I wouldn’t know any different. It was only until I traveled the US and saw first hand what this world was like.
Was it consuming at first? I was consumed with skateboarding at the time I started. Then over a short period, I dropped the skateboard to write graffiti exclusively.
Read the whole interview here: hypebeast.com 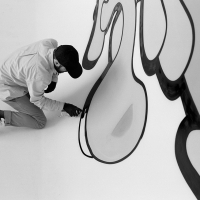