What’s graffiti for you?
Graffiti is being free from all the structures and rules, society forces upon us. It’s a space where people are their own masters and can do with it, what they want. It’s a creative force that comes from the soul and communicates to those who are looking at more then their phone while commuting through their city. It has followed me through life in different forms, and I do it in my own paste. To me, graffiti is freedom.

Influences?
The same old story really. I am influenced by 70s and 80s graffiti from New York. I also love Scandinavian, and of course the Danish pieces, from the 80s and 90s era. I also get inspired by old comic books, psychedelics, Sci-Fi movies and things I see on my way.

Tell us about your city, how is life and graffiti there?
I live in Copenhagen which is the capital of Denmark. There is always a party or places to chill. It has a rich graffiti culture, where a mix of generations all brings something to the scene.

What keeps you still writing?
The simple answer is I love graffiti. I have painted more than half my life, and I can’t imagine it to be any other way. Sure I’m older now, I paint less and for other reasons than when I was younger. But it’s still a huge part of me, and I imagine it always will be.

What first made you interested in graffiti and how did you end up on that track?
I grew up in the suburbs of Copenhagen in a place called Sorgenfri. A lot of big writers came from that area. Because of that, there was an active scene on that part of the line. So I remember seeing pieces from Freez, Wel, Sek, Rens and Sabe to mention a few. I was very young, and this was some years before my first attempt to do a piece. But I still remember seeing these pieces in awe. I was drawn by the Hip Hop culture early on. My parents, especially my dad supported that a lot, so I owe a lot to him for getting into the Hip Hop culture and later on, graffiti.

What trends are you seeing now in the graffiti world that you don’t like?
I think it’s easy to see what are the new trends. Suddenly a lot of people bite on that. That is a shame. Rather than jumping on to the next hype, people should believe in their own vision and go with it. Like I said, I get inspired by the traditional Copenhagen style and by the Scandinavia style too. I think that can be seen in my pieces, but I try hard to develop on that and give it my own twist. It takes time to develop style, and I think a lot of the people jumping on trends, simply to hide behind not being able to take the time to be original.

How would you describe your style?
Playful. Might be some sort of twisted psychedelic wild style. I try to paint as I feel in the moment, develop and most important to me, try not to do the same over and over.

Can you remember the first piece you did?
I remember it all to well. I had no clue where to start, so I had this huge pencil with me, I sketched the piece up with that. The piece read Spel (Should have read spell). It was light blue with red drop shadow all painted with standard caps. No outline or white lines. Next to it was a scroll. I don’t remember what I wrote in it. But it was a terrible piece.

Future plans?
I try to live day by day as much as life allows it. The only plan is to keep going as long as its fun.

Do you adapt your pieces and tags to the spot/surface?
I have stopped painting from a sketch, so I do let the place be part of forming the piece. I like to paint what I feel like, instead of copying a sketch that I’ve already drawn.

What do you think about the new generation of writers in your city?
I like that it keeps going and how active the new generation is. I wish that the more of the new generation would spend some time on the history and unwritten rules behind graffiti. It saddens me when a fresh burner from a legend gets run over within a few days. Simply because he isn’t that active anymore and people have no clue about their own history. Without all of them to lead the way we wouldn’t be where we are today. Plus there are so many gems hidden in our history, so for that alone it’s worth to check up on.

What are the best and worst aspects of graffiti?
Think I have covered the best. The worst for me, is that you can end up in jail, with huge fines to pay. I have spent a little time in jail for graffiti and there I was offered many other ways to do crime. Hard crime doesn’t appeal to me and it was not a problem for me to say no thanks, but it could easily have taken me on a path of more serious crime when I got out. To me that is ridiculous. We change the colour of a surface. There is no money to gain for society as there is for example in the advertisement business, which also uses our public space. So it’s a crime that costs society money. I still can’t see how that justifies putting someone in jail for painting a new colour on a surface. I have never asked to see huge Mountain Dew commercials, political agendas or other sell out commercial shit in our shared public room, for example for joining the army, political parties and so on. But they pay money, so suddenly that is accepted. In the end it’s a problem within our law and society, more than it’s a bad aspect of graffiti. Still no denying that it can send you away for a period.

Who do you paint for?
I don’t really paint for anybody but my crews and myself. I guess that I am egocentric that way.

What writers have inspired you?
Besides before mentioned, old-school New York and the 90s graffiti in Scandinavia, I get inspired by my friends and the energy they still put into it, in very different ways. To name a few in random order: Grape, Zoid, Week, Homo, Toms, Iste, Waste, Curse, Miles, Smag, Mone and Ligisd.

Can you ever feel tired of graffiti?
I get tired of all the gossip and beef. But that is a part of any subculture, and even culture in its entirety. So that has nothing to do with graffiti itself. I try to stay out of all that and focus on painting.

What do you hope people will think and feel when they see your stuff?
I hope other writers see the love I have for the culture. Regular peoples opinion doesn’t matter that much to me. If they like its cool, if not its all good too.

FIVE FAVORITES
Spray Paint: Montana Black.
City: Copenhagen. I know my way around here.
Markers/pens: White Posca is an old favorite.
Surface: As long as the paint sticks to it.
Cap: Don’t think I have one 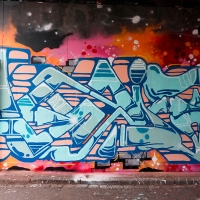 This is our new photo series called Wednesday Walls! We will post a pile of walls on wednesdays sent in by our contributors world wide.
Contribute to the next wednesday walls post by sending a email to: Info@spraydaily.com


New graffiti walls photographed in Copenhagen this month done by writers such as Sabe, Mone, Disk, Smag and many more, check them out!